Horsehair rope was valuable because of its lightness and strength but the supply was limited.
‘I was told that if a man who had a pony with a fine tail stabled it at an inn while he attended market or other diversions, he was apt to find that all the hairs had been plucked out when he returned to fetch the beast.’
(Highland folk ways)
RN09. ‘In Martin Martin’s day the marriage portion of a St.Kilda woman was expected to bring her husband was 1lb. of horsehair for the purpose of making thin ropes to snare the seabirds.’
3 balls of twine from the entwined exhibition 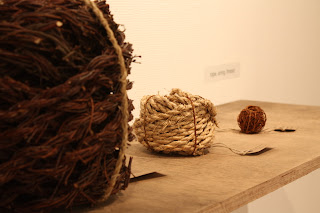 Caroline Dear
www.carolinedear.co.uk Artist living and working on the Isle of Skye, Scotland. I work with the land and the plants around me. I am interested in making work which questions our ever changing relationship with the natural world.